The Mockingbirds by Daisy Whitney

Themis Academy has the best and brightest. You see the ivy-covered walls, the graduates going on to prestigious colleges, students performing at the top of the game, both academically and athletically. It’s the perfect, picturesque campus….but it’s only the surface of what really happens.

Alex, a junior a Themis, is gifted with musical talent. She does everything a model student is expected to do, but one night changes her life. When she wakes up in Carter’s room, all she wants to do is disappear and hide, but it doesn’t happen. Now, everywhere she turns, he’s there telling everyone what happened, and the shame she feels for that one mistake is now becoming the new fodder on campus. The stares, the whispers, and the lies…

Alex doesn’t realize that there is help on campus, even if the teachers and administrators only want to see the façade they’ve created. Now, walking on campus, going to the caf, even trying to study in the library is extreme torture for Alex. She does everything to avoid Carter, but he keeps showing up. With the help of her roommates, Maia, and TS, Alex is introduced to the Mockingbirds, a group on campus dedicated to underground justice.

In bits and pieces, her nightmare comes back to her and the reality of the situation is serious – date rape. It’s after the Mockingbirds decide to “take the case” that Alex begins to feel that there is justice, especially after hearing and seeing other cases of bullying and student abuse that go on at Themis Academy. But she also knows that her situation is a he said/she said situation, and will it be that easily remedied?

Drawing on personal experience, author Daisy Whitney takes the reader inside the walls, hearts, and justice of the students in this novel. The complexity of the Mockingbirds itself creates a system that has a complex structure for both the accuser and accused. Alex’s character runs deep, from the personal shame, to fear and humiliation, to a sense fresh beginnings. Whitney writes an excellent novel on the psychological and emotional response of and from a victim who has nowhere to turn but inwardly and a group who saves her from it. This is an excellent novel and one that will resonate with readers, especially after a year where bullying has made headline news. Highly recommended
at 12:32 PM 1 comment: 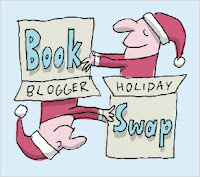 If you're like me, then you enjoy the great days before Christmas, when colleagues join forces and show their spirit with the traditional Secret Santa.
Well, I just joined the coolest one I've ever seen!!  It's a book blogger swap!  So, if you're an avid book blogger and want to participate, the deadline is November 14!  Here's the link:
http://holidayswap.wordpress.com/

YA Books about Bullying, including trailers

Mikey knows he has a smart mouth, but he makes up for it with style.  He wears a suit everyday and it doesn't matter is people think he doesn't fit in or that he's short...his suave style gets him through the day.  And a good day is one where he doesn't have to meet up with his sister Marie's boyfriend, Jon.  Everyone in school knows that Jon's the major pusher, whatever your drug is.  He's got the looks, the money, and whatever he wants.

But one day, when the cops come in with a drug dog, Jon forces a bag onto Mikey for "safekeeping."  And when Mikey ditches it, Jon Brandt makes his presence in Mikey's life more known, and he and his gang, Trey and Kyle, will make sure Mikey repays.

In perfect timing, Shayne arrives.  Driving a beat up BMW motorcyle and sporting dark clothes, Shayne doesn't shed a ruffled feather as the new guy.  He sees what's going on between Mikey and Jon, and decides to do something to help Mikey.  Through a series of events, it seems that everything Shayne does to help makes matters worse for Mikey.  When you get two alpha guys against each other, something is going to snap....

Detective Rawls has seen them come and go.  When it comes to teens, he can pretty well read them since he's spent his life in that department.  It's at the opening of this book that the reader sees Shayne sitting in the police station, wanting to make a blank confession of murder.

Pete Hautman's books are short but powerful, and this is another fine example of a quick read with high impact.  What exactly happened between the first showdown between Shayne and Jon to the present, where Shayne is at the police station?  Told in flashback, Hautman draws his characters out, allowing the reader to take small glimpses of who they are while maintaining the pace of the story until the climactic denoument at the end of this novel.  The reader is drawn into the personas as much as the storyline, and that is what gives this book excellent qualities of a great YA read.  Compelling, intense, mystifying....all wrapped up in a perfect package Hautman delivers to his audience.  Highly recommended
at 12:41 PM No comments: