This year, I decided to use memes in the freshmen orientation for two reasons: 1. kids can relate to these (since they use and make them all the time themselves) and 2. let students know the library is more than rules, guidelines, and shushing. It can be fun, imaginative, creative, and inviting. I did a test drive with our new teachers for new teacher orientation, and although it was unexpected, they thoroughly enjoyed it! :) Basically, it's all about relationships, and this is a fun way to do it. Most of the memes I created myself using imgflip.com SUPER easy!!
Freshmen orientation for Library from Naomi Bates
at 11:18 AM 6 comments:

Used a great new tool (www.kizoa.com) and LOVE IT!  Free to use, but also inexpensive for a lifetime purchase.

In this new BYOD world we live in, creating videos has never been easier.  You don't have to lug around a laptop anymore...you can create stunning videos straight from your iPhone or iPad.

Two newer apps that have come on the scene and made things a LOT easier are both from Adobe and are amazing!  I'm not saying this flippantly..I love these two apps!  Admittedly, book trailers take time, but with these apps and an iPad students can start easily using their camera roll or online sources.  I'll break down both apps as well as give hints on making using these easier.

So here's a breakdown for both-

Adobe Voice:
-search photos on your camera roll OR through a CC image search built-in
- add music Adobe provides or use music from your iPad.
-record your voice to narrate a book trailer
-you can add titles and text between images for a more traditional trailer
-manage how long an image stays on the screen (up to 5 seconds)
-add icons
- from 32 themes that automatically add movement to your video
-save your project to work on at different times before you publish
-it has an option to make it private or public
-share via social media, email, or add it to your camera roll
-available only on iPad

Adobe Clip:
- add either clips or images from your camera roll.  This app doesn't have a CC search, so shooting videos will be the best option for this app.  You can search for CC images in Google and save them to your camera roll as the best option for images
- has a built-in trimmer so you can customize your video clips or add slo-mo
-add individual text slides between clips or images
-add music from the library provided or from your stash on your ipad
-selection from three transitions: fade in from black, fade out to black, crossfade between clips
-has a built-in image enhancer with 30 different filters
- publish and share the video on social media or through Adobe Creative Cloud (there isn't a private button on this one)
-available on iPhone or iPad


Hints:
-mash up these apps with different apps like Whiteboard or Paper 53 to add text or videos
-think of other places to get CC images or videos like Instagram, Facebook or Vine
- download Google Slides or Docs to create unique text slides
- use an app called Downloads Plus lite to download and use CC friendly music from Purple Planet 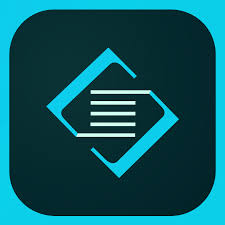 And now to play with Adobe Slate, the newest app that helps make reports, newletters and other text-based documents beautiful by adding photos into them. 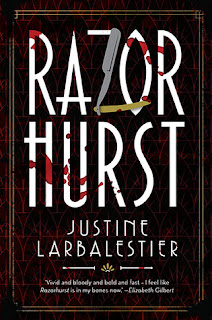 Kelpie has been on her own for most of her life.  She has vague memories of her childhood, but the street life in Razorhust is her home.  She's been fortunate, getting help from people in the city...whether dead or alive.  Kelpie lives on the streets of Razorhurst, a  part of Sydney divided between two gangsters, their henchmen, and a beautiful moll.  And it's when Kelpie steals into a home she shouldn't have that her world completely changes.

Looking at the murder scene was rough enough, but now the ghost of  is following her.  What's more, Kelpie is being used as cover by Dymphna, who thought she was smart enough to leave gang life, or at least take over.  With the law prohibiting guns in Australia in the 1930s, everyone thought gang violence would wane, but razors came out, just as deadly.

Dymphna and Kelpie are polar opposites.  Called the "Angel of Death" because all of her boyfriends end up dead,  Dymphna is well taken care of by Gloriana Nelson, who considers her one of her most valuable assets.  Beautiful, well-coifed and dressed, Dymphna exudes glamour, although her path in life is far from glamorous.  Kelpie, on the other hand, is small, looking more like a child (although she's a teenager), fiercely (or perhaps ferally) independent, and hasn't known the inside of a bath tub in a long time.  And while they may be different, they share one very important thing in common-they both can hear and see ghosts...

They're now both on the lam.  Mr. Davidson, one gang leader, is stalking Dymphna, where his stalking has very serious undertones.  Gloriana is also searching for her, for reasons she doesn't have to explain.  And friends of Kelpie's are also following her, trying to make sure both she and Dymphna stay alive.  But is that possible in a cat and mouse game of the 1930s, where lawlessness abounds and innocent lives are considered a small loss in the pursuit of glory, power and control?

What makes this book such a standout is how Justine Larbelestier creates a dual-genred novel (both supernatural and historical fiction) that wraps itself around real history  and biographies of Australia and Australians in this book.  Readers will not only get caught up in the storyline but also begin to make connections and differences  between both the U.S. and Australia and how gangsters shaped the country.  Although this book is filled with male characters, both good and bad, it's the two females that create the strength in this novel.  Larbelestier uses the ghostly characters as a backdrop to further strength Kelpie's and Dymphna's character flaws and attraction.  I thoroughly enjoyed this one and consider it a strong historical fiction novel for YA.

The Witch of Lime Street: Seance, Seduction and Houdini in the Spirit World 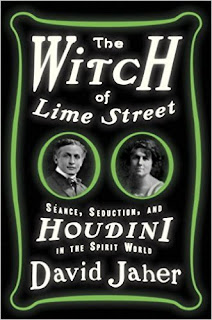 The 1920's was an unforgettable era in the United States, and the biggest event to impact many lives was the end of World War I.  Millions of people died, millions of families grieved.  Not only were there big events, but big personalities as well.  One of the grandest and boldest of Americans at the time was Harry Houdini.  There were also new trends and beliefs that began to sprout, and Spiritualism was taking over the world.  Together these three combinations would make for a fascinating story....

Sir Conan Doyle, English author, became entrenched and entranced with Spiritualism when we lost his son to the war.  Through mediums, he was able to talk to his son beyond the grave through a seance.  This became a passion that Doyle brought to the United States, which created a furor and controversy and the validity of mediums and their powers.

While speaking to throngs of people in auditoriums, Doyle was able to convince many that communication with the dead was a different kind of science.  What you may not be able to see doesn't mean it doesn't exist.  With that in mind, a very reputable publication as well as scientists and professionals from Harvard, began to investigate mediums to see if they could discern between a true medium and a charlatan.  Along with the investigation, a $5000.00 award would be given to a medium who truly had the gift.  One of the many professionals on this team was Harry Houdini.

Harry Houdini was a master of deception.  Having worked his way beyond vaudeville, Harry learned and knew all the tricks of the trade and could easily spot them.  One event that bolstered Harry's goal to exposing medium frauds was the death of his beloved mother.  Even Harry wanted to be swayed to believe mediums could connect him to his dear mother, but in the end, he realized there were con artists on every corner waiting to make money from the grief of another.  This he couldn't tolerate.

With believers on one side, and naysayers on another, a medium entered into the fray claiming she was the true embodiment of a medium.  Unlike others, this beautiful woman, Margery, was the wife of a doctor and lived in a wealthy area of New England.  She didn't need the money and because of her status, many were disposed to believe her talents and story.  Why would a high society lady lie?What could be her motive?  And Margery truly had talent...but was it real or not?  A war was about to begin between Margery and Harry.  Who would ultimately win?

Steeped not only in an interesting era of history, the author creates a story centered around two people, with many other characters woven throughout to make this another piece of history not taught in most textbooks (it always seems like the best stories are left out!)  Written in narrative format, this book is enjoyable to read, and the images were peculiarly interesting.  An excellent additional to any YA non-fiction section, this could most certainly be paired with excellent YA fiction, including Libba Bray's The Diviners books.  Recommended.