Okay, so I went with some information gathering technology during this booktalk to see what I could gather about the readers here on my campus.  This was done in a day (booktalked two days with a colleague) and they were mostly freshmen and sophomores.
12 classes
391 students
189 girls
202 boys 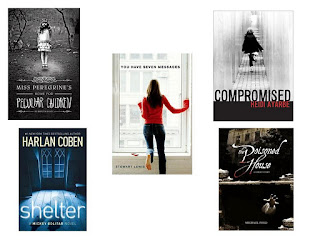 
The bottom five picks for girls:
The Watch That Ends the Night by Allan Wolfe
Freak Magnet by Andrew Auseon
Dust and Decay by Jonathan Maberry
Bad Taste in Boys by Carrie Harris
Scorpio Races by Maggie Stiefvater

Ahhhh, the girlies.  They will read guy books, girl books, non-fiction.  You can tell from the top five that they run the gamut of genres.  Most of the titles in the bottom five were interesting as well.  Three of them were pitched for guys and girls but had a more grisly vibe to them.  Girls don't seem to want to read about man-eating horses or zombie pit fights.  Interestingly enough, not all of the book trailer books made it into the top ten for the girls.  Most of them did, but Variant by Robison Wells wasn't in their top ten.  As for Bad Taste in Boys?  See the comment I made in the guys section below.  Applies here as well. 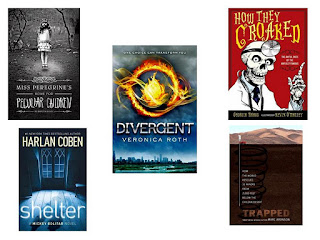 The bottom five picks for guys:
You Have Seven Messages by Stewart Lewis
Bunheads by Sophie Flack
How to Save a Life by Sara Zarr
Freak Magnet by Andrew Auseon
Bad Taste in Boys by Carrie Harris

It seems that boys never lose faith in non-fiction.  The only two non-fiction titles were in the guys top five.  My personal opinion is that when they get older, it becomes more difficult for guys to really find enjoyable non-fiction titles, which is why I always include 2-3 titles in the booktalk.  Of the top ten titles for guys, all five  booktrailers made it, which may show they boys tend to connect visuals to the choice of books.  And the bottom picks?  All girls books, with the exception of Freak Magnet, which is told in alternating guy and girl voices, where the main character is considered a "freak."  The only caveat I would have is Bad Taste in Boys by Carrie Harris, which was the very last book talked, and if we ran out of time, I had to give it a hasty talk and hope they kids could hear me as they exited en masse out of the lecture hall.

Would you look at that?  The top four picks had book trailers.  Another point of interest was the top 10 was divided right down the middle for traditional booktalking and the use of book trailers.  That's why I usually  incorporate a 3:1 ratio of traditional to trailers.

So there's my little experiment using Google Forms and the cooperation of 391 students.  I really liked this and could go on about different genres, how the books were talked (summary vs. audience participation), length of time for each book, order of book in the presentation et all, but this is just the general gist.  Hope you enjoyed my rant : )

Another Digital Platform for Booktalking

I enjoy using technology, and I've always used Prezi for booktalks. But I ran into some trouble where Prezi wasn't allowing me to upload images...don't know why. So after teaching several classes about Weebly, I decided to try that platform instead and found I really liked the layout! So here's the link to my booktalk website, including links to all authors, a list in genre form, and books with links to trailers.
http://www.nhsspring2012booktalk.weebly.com/
at 7:47 AM No comments:

Finishing up the ones I hadn't already done. Here they are : )

Got this idea from a very dear friend....it sure looks a LOT better than just plain signage! I'll post another lot tomorrow 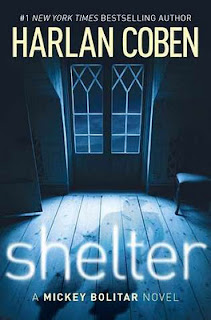 Mickey Bolitar has lost everything. His father is dead, is mother in rehab. The only person left to care for him is his uncle Myron, which he isn't too thrilled about.

What is good, though, is the fact that finally Mickey is enrolled in a regular high school. When he was younger, he traveled the world with his parents, but not anymore. His first day of orientation, he meets Ashley, and they begin a slow, tentative relationship.

When the first week of school starts, Ashley has completely disappeared. Even stranger, the old Bat Lady in town (yes, the one who lives in the dilapidated house and everyone tells stories about her) tell Mickey his father is alive. But how could he be? Mickey saw him die....
The further Mickey gets entrenched in these circumstances, the more dangerous a game he's playing. And the people he meets may not be who they say they are.

Coben is best known for his adult mystery fiction, of which I'm a fan of. This is his first venture into young adult fiction, and he does an excellent job in transferring his writing to a completely different audience. YA readers of mystery will swallow this book in one sitting. The characters and their lives in high school isn't a shallow brushover, but conveys exactly how teens live in today's society. Readers will enjoy the relationship between Mickey and his peers with all of their quirks. When I read this, all I could think of was Law & Order: SVU - it has that kind of quality about it. Fast-paced, I'm looking forward to more from this author. These would be great segues into adult fiction for those teens ready to make that transition.

There's also a great book trailer for this one:
Shelter book trailer
at 11:05 AM 1 comment:

E-books and Digital Books in the library - a prezi presentation

Just a little information I came up with for a presentation for a district library meeting.  Worked on it with a fellow librarian, Lindsey Mendrop.

Email ThisBlogThis!Share to TwitterShare to FacebookShare to Pinterest
Labels: presentations 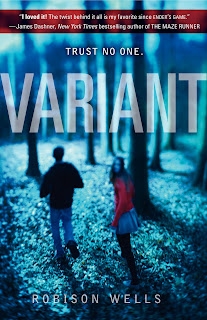 I can't get to Youtube, so it's posted on Schooltube and the NHS library webpage:

http://www.schooltube.com/user/naomibates
at 2:12 PM No comments:

The Watch That Ends the Night: Voices from the Titanic by Allan Wolf 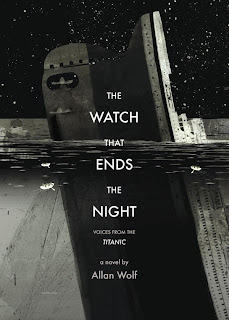 Question:  What sank the Titanic?  How many died?  Would it be hard or easy to imagine this disaster?
Well, thanks to James Cameron and the phrase, "I'm King of the World!"  I'm sure you can.  But then again, there are many sides to the story, and this novel takes on these many sides in a remarkable way.

Meet the first voice in this novel-in-verse.  His name is John Snow.  And he's the one that had to pick up the dead left after the Titanic sunk.  His tale told will make you think about the aftermath....

How about Charles Joughin, the baker?  All he thought about was the bread, the passengers, and the food on board.  It's his tale from the time he stepped on board till the time he was in the dark cold water....

Then there's Frankie Goldsmith, only nine years old when he sailed.  He got to meet the captain and others, but he was on the lookout for dragons.  He just didn't know dragons could live in ice...

And there are other voices as well, from the iceberg itself, calmly waiting for its destined meeting with Titanic to the rat who got a ride.  And there are familiar voices, such as John Jacob Astor, Captain Smith and Margaret Brown.  Whomever it is, the characters are all entangled with each other, sometimes bumping shoulders.  Their lives are separate at first, but become more intertwined the further the novel takes the reader.

What's unique about this book is that each and every character (well, maybe not the rat - they really can't talk) was very much alive and a part of the disaster called the Titanic.  Wolfe found his characters from true historical evidence, then weaved this into a unique and compelling novel-in-verse. He details all of this in the author's note, along with a brief biography of each person included in the novel.  This was just as much of an intriguing read as the story itself because Wolfe also tells where his imagination for some of these characters became part of the story.

There are twenty-five voices in this novel, but don't let that intimidate or overwork the mind.  Instead, each voice that comes to life will tell the story of the Titanic in twenty-five different ways but ultimately will only have two endings.  All told in novel-in-verse, this is the story of the very beginning of the Titanic from its first rivet to its last collapse.  And while the prose is beautiful, the poetry is amazing.  This year marks the 100th anniversary of the sinking of the Titanic, and this book is the perfect fit for this milestone.

This isn't necessarily a novel for teens, but is a fantastic historical fiction for any collection.  The way the author approaches this subject through NIV will make it more interesting to those teens like enjoy this genre and readily read YA authors like Ellen Hopkins, Lisa Schroeder, et al.  Highly recommended
at 3:34 PM 1 comment:

Ebooks and Libraries: A Stream of Concerns

Ebooks and Libraries: A Stream of Concerns

I've really tried to justify the using of Kindles and Nooks in the library, and I've really been researching this topic. I just don't think that I'm ready to jump into this whole concept. Right now we have 1:1 netbook to student ratio, and I quite like the free e-books available to them..... I really like this blog. More to come
at 10:05 AM 5 comments: