I Hunt Killers by Barry Lyga

And here's my latest book trailer for an AMAZING read!!!!

The Pledge by Kimberly Derting 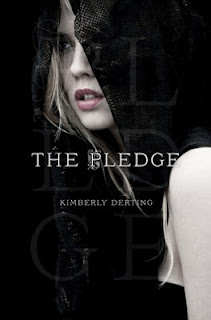 Charlaina lives in a world ruled by royalty.  She's part of the working class, far removed from the court.  In her world, societies are broken down by languages, with Englaise being the common language.  For her part, she and her parents, who own a restaurant, speak Parshon.  As long as she's been alive, it's always been accepted that you don't make any type of contact with those that speak another language on a higher social order, but that's hard for Charlie.  She has a special gift - she can understand all languages....

Sabara, the queen knows she's losing her grip on her world.  She has to fight the Resistance, who wants to overthrow her, but more than that, her body is giving out on her.  She needs a replacement, a royal whom she can transfer into.  There's rumor of one, and she's put her grandson, Max, in charge of finding this rumor.  He can't let her down...she needs this one.

Soon the city Charlaina lives in and Sabara rules become chaotic, with the underground Resistance bombing buildings and destroying lives.  Charlie, along with her best friend Brooklynn and Aron, watch as their lives are ripped apart.  But is this being done for the right reasons?  When Charlie is in the crosshairs of both factions, which will she trust?

Derting's first dystopia novel blends in fantasy in a society struggling to stay alive.  Charlie is a strong female character whose responsibilities far surpass those of a typical teenager but her emotional struggles are all too real.  Seen from different viewpoints, with most of those being Charlie, helps the reader understand the full spectrum of the world Charlie lives in without being lost in the plot.  This mixed genre will please readers of both fantasy and dystopia and is pitched well on both sides.  Derting makes an excellent transistion from her mystery novels into dystopia.  Fans familiar with her Body Finder series will find her newest novel equally enthralling!
at 9:06 AM No comments:

Dark Inside by Jeyn Roberts 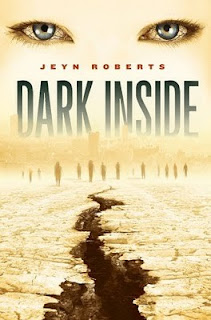 It was just the beginning of an ordinary day for four teens in different cities, in different states and provinces.  But it wouldn't take long for their lives, and the lives of everyone they know, to change.  What started as violent earthquakes that began to shake their lives turned into a living nightmare they escaped from.

Aries, Mason, Clementine, and Michael don't know each other.  There's no communication, no electricity, so they have no way of knowing how extensive the catastrophe is.  All they know are the horrors that are lurking out there, waiting for them.  They know it's a killer's spree that dominates the real world now.  Something happened when the earthquakes started, and people who were good and decent are now psychotic killers, participating and enjoying the thrill of the hunt and kill.  They're called Baggers, and their prey are other humans.  You can tell a Bagger because of their eyes...the veins are black and what's hiding behind them is even darker. Baggers aren't monsters physically, but they are psychologically, creating, without prejudice, acts of violence against anyone from lynching to stabbing to shooting...the list goes on.

Now all four are on the run trying to save their lives.  They hide from the Baggers and try to find others who haven't been "touched" by this virus (or is it?) and continue to fight another day.  All around these teens is chaos - fires burning, bodies laying wasted on the ground, scavengers looking for a place to stay, terror.  It will take fortitude to propel them further, if they can make it.  What they don't know is that this dark nothing, this evil that has invaded humanity, may be lurking within the circle of trust they've relied on in order to survive.  Can someone repel this evil Nothing, or will it eventually take over and create a Judas in Aries, Mason's, Michael's and Clementine's groups?  Is it safer to work together or be alone?

Reading this novel is like watching it become a movie.  Roberts writes with gritty realism and leaves very little to the imagination of the horror these teens are battling against.  All four main characters each have unique personalities that make them strong but may also make the reader wonder if that character can be trusted.  The whole theme of good vs. evil permeates throughout the book with a strong overlay of trust vs. distrust.  Dystopia readers take heart, this is one teens will enjoy.  It's quite different from other dystopias I've read currently simply because there are no monsters, zombies, or futuristic details.  This story could take place now or in ten years, so it has no time stamp.  Readers will gasp in horror as well as surprise while quickly reading through this novel told in four different viewpoints and hurriedly read through one teen's experience only to see what's happening to the other three.  A very thrilling read!  Recommended for high school.  Excellent trailer on this one:  http://www.youtube.com/watch?v=mLMh_xIhiDc
at 10:42 AM No comments: