Clara thought she'd found love, but what she didn't realize is that she'd found obsession as well.
After a bad relationship in the past, Clara sees Christian for the first time and she feels that connection. Even though they go to different schools, she makes the time to "bump" into him again, and a deeper relationship soon begins. She likes the way Christian makes her feel - wanted, cared for, concerned about - and the way she can be a new person around him. He's a good person, but sometimes, good is just a layer hiding the real truth.

Now, Clara and her father have moved away from Seattle to get away from the person Christian really is, and Clara wants no contact from him, this time from fear instead of love. They settle down in a small seaside village and soon become part of the community.

Life goes well for Clara and her father, but there are still secrets that are lurking under the happiness. Clara has become increasingly aware that her dad is hiding something about her mother through conversations she overhears between him and a close friend. Clara also has to get used to sharing her world, not only between herself and her father, but also with herself, when she begins a fresh friendship with Flinn, whom she meets by chance.

Always looking over her shoulder, Clara soon begins to find some breathing space, until a message comes through on her new phone - from Christian.  Soon, she finds herself living a life of paranoia, convinced that he'll find her, that he's still around....and her paranoia then becomes reality....

Deb Caletti has written a beautiful novel, surrounded with layers of descriptive and poetic writing filled with witty metaphors, ironies, and narrative.  She not only breathes life into her characters, but creates images through her words, so that what the reader is taking in becomes visual in their minds (I, for one, would LOVE to meet Clara's dad!!)  Caletti's book is serious in tone, but her deft writing also provides some comic relief in the form of all things, a seagull, which she uses at perfect opportunities to give the reader a pause, just for a moment, in Clara's life.  The adult characters in this novel aren't separated that far from the teen main character, but become a huge part of the story, that of a daughter and her father.  But above all, it's about relationships on all levels, from friendship, to family, to loves present and past and how to make the decision to leave or stay.  And this theme will draw readers in.  Highly recommended
at 12:25 PM No comments:

Sometimes, I make a good book trailer, sometimes I KICK BUTT on one...this is definitely one I feel is the one of the best I've created so far....enjoy!  You can download it on my NHS Library webpage as well as link from youtube or schooltube.  NHS Library link:  http://www.nisdtx.org/site/Default.aspx?PageID=3587

The Horrors of Andersonville: Life and Death Inside a Civil War Prison by Catherine Gourley 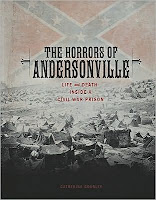 Some of the first pictures of war were from the Civil War, fought in the U.S. between 1861-1865. There were the famous men, from Lee to Grant; famous battlefields from Antietam to Gettysburg; and famous cities, from Richmond to Charleston to Washington D.C. But there’s the dark side of war too – the prison camps that hardly anyone talk about, that paints another part of the picture that was the Civil War. And Andersonville was one of the most squalid prison camps to come out of the Civil War’s history.

Andersonville didn’t start out as a prison camp. Set in the countryside of Georgia, 27 acres in swampy land would be cleared to hold Union soldiers. Built to house 10,000 prisoners, Andersonville maxed out in 14 months with over 32,000 soldiers, all living in squalid conditions with little food, no fresh water, lice, mud, open sewers….through cold winter nights and steamy hot summer, prisoners were left to try to live not through the war, but through this hell on earth.

The story of Andersonville is disturbing and intriguing at the same time. From orders issued from commandants to build the place, to the person (Wirz) who led camp, hindsight proved to be too late. There were no trade-offs between the Confederate and Union armies to free prisoners, afraid that once out, the soldiers would swell the ranks of that particular army. There was no discipline within the walls of Andersonville except those that belonged in gangs and those that opposed them. Everyone was fair game to be used, cheated, and killed – not only for their clothing and items, but for their living space as well. There was no food, especially not for prisoners. Men who came out Andersonville looked like walking skeletons, malnourished and suffering from anything from rickets to gangrene.

This non-fiction book is comprised of letters, diaries, first-hand accounts and court documents as well as photos and images of Andersonville for newspapers printed during the time. From the present perspective of the author looking back into history a new picture and story emerges from all of these primary source documents to weave a tale of hope, survival, death, and dedication. The author also uses inserts to other pertinent information involved with prison camps, including army orders, problems throughout prison camps in general (ie lice, gangrene) to personal letters, which creates a sore spot in once was called a gentleman’s war.

Catherine Gourley writes a great book to add to any collection of Civil War books, but what makes this one stand out is fact that this subject hasn’t really been written about or noted in most Civil War histories. Gourley writes for the reader, making it easy to process the facts, all the while keeping interest high through the many images and documents used within the book, which makes it highly appealing for teen readers. Gourley takes the reader on the journey instead of the reader digesting the facts, which is the beauty of the book. Highly recommended.
at 2:22 PM No comments:

Josh loves hunting zombies. He knows the rules of the game, and he’s good at it. He’s quickly risen in the ranks of zombie hunting and his skills no few bounds. There’s only one problem – his parents have banned him from playing this virtual game because it hits too close to home.
This is the year 2032, and Josh knows about the deadly virus that created a war between the well and this stricken that happened 15 years ago. It was a virus that slowly deteriorated the brain, creating “zombies” of those that had no control over their synapses anymore. It was kill or be killed, and to this day, Josh’s mother won’t talk about her experience much. But to Josh, it’s past history, and the game rocks. There’s nothing like killing meatbags and trying to out maneuver them to be the best torcher in the game. He and his best friend Firecracker, play online together when they can, but it’s Josh who receives a strange message from Charlie, THE best player, that’s an invitation to something deeper, something hidden….
When Josh finally meets Charlie, he’s amazed, not only that she’s a girl, but that there’s real zombie hunting going on without anyone being aware it’s happening. She invites Josh into a dark secret, where a real game is being played… humans vs. zombies… and televised live to a wealthy audience. Josh not only gets to play the game he loves, but also make some money at the same time.

But with all secrets, dark and deep, this secret holds a deadly consequence. Josh doesn’t realize it at first, but the more he plays the real game, the more he realizes he’s in over his head. But is it too late to stop playing? Can he just quit, or is he an unwitting victim in a game he thought he was in control of? Is Josh the player or the played?
What a great dystopian book that has so much written into it! Michael Thomas Ford has created a unique and brilliant premise not about zombies as monsters, but how a small virus infected the human race, one that put strains on relationships and families, both well and infected. The game simulation Josh plays under rides the main theme and focus of this book, but plays so well alongside it, making this one readers won’t be able to get through fast enough. This is one guys will pick up and read, and girls will too thanks to Ford’s main characters. I’m hoping there’s a sequel….it definitely leaves it open to one!
at 11:14 AM 4 comments:

Cara is a loner. She doesn’t have many friends at all. She left her best friend Zoe behind when they were just kids and she’s never replaced her. There could be no replacement for Zoe. But Cara wishes she could see her again, especially now.
Cara’s high school life consists of living in the fringes of society. She is part of the track team, but not quite part of the girls. But an incident in the cafeteria escalates Cara into running and hiding, especially from Alexis and Syndey, whose mission is to make Cara’s life miserable. They have everything going for them, especially Alexis, who’s dating Cara’s fantasy boyfriend, Ethan, who’s more than real. She doesn’t understand how someone that nice could be with someone that nasty.
Living beside Sydney doesn’t help either. Cara gets to watch the parties, the friendships, the life she’d love to lead through her bedroom window. It’s not enough that people in school don’t include her, but her parents are always absent as well, working through the nights in their law firms and leaving Cara by herself.
But one day, Cara comes home, and Zoe’s there. Her best friend, who’s run away from problems of her own asks Cara to help her, hide her, protect her….and Cara is ecstatic to have her best friend back in her life again. It’s easy to help Zoe with her parents gone, and Zoe more than helps Cara with her self-esteem and problems at school. And slowly, Cara’s life begins to blossom, from making friends, to even catching the attention of Ethan….

But then, one night Sydney mysteriously drowns. Accidental or deliberate? The town is rocked to its core, and Cara begins doubting how harmless her best friend is. It isn’t until Alexis shows up missing that Cara’s doubts become stronger. Is Zoe to blame?

Elizabeth Woods makes a stunning debut in her first novel. A glimpse into the life of a girl who’s been bullied and separated, Woods, connects the reader to the character through those emotional ties that are so important. The twist in the book is subtle and Woods manages to reveal it slowly but steadily throughout the narrative. This novel will keeper readers entranced until the end. Perfect pairing with de la Pena’s I Will Save You. Recommended.
at 10:48 AM No comments: