Using a website called Mindomo (makes some great infographics and mind maps!) I made an infographic of what recommendations for YA novels.  There are 13 genres represented and comes with book trailers when available. 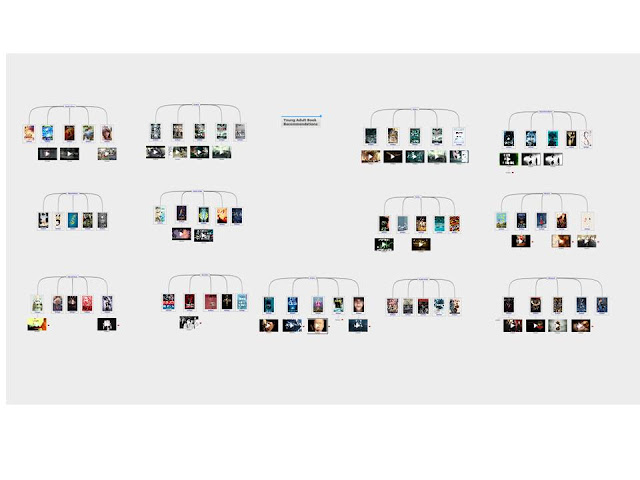 It was just begging for one!  Loved this book...perfect for those who enjoy horror fiction Recommended JH/HS

If you can't access Youtube, here is the link for it to view via Google Drive:
http://www.nisdtx.org/site/Default.aspx?PageID=3590

Top Ten Tweets and Favorites (Plus One To Grow On)

9 Reasons Why Librarians Are Awesome: http://www.buzzfeed.com/jul13hong/10-reasons-why-librarians-are-awesome?utm_term=.mgkarkzKA#.pwDNNVw0v

Tried and Tested Internet Sources for the Classroom...and beyond: http://www.boxoftricks.net/
Personal Tweet: " I believe a sign posted on any library door should never use the words "closed" "not allowed" or "No (fill in the blank)  #TxLChat"
Personal Tweet: "Told the kids today the only thing they CANT do in the library is nothing :) "#TxLChat
Excellent poster:  "Thanks For That Amazing Worksheet" https://twitter.com/sjunkins/status/444231236794339328
Teenagers react to printed encyclopedias and it's absolutely priceless: http://www.mirror.co.uk/news/technology-science/technology/its-internet-books---teenagers-6066336
at 1:59 PM No comments:

Email ThisBlogThis!Share to TwitterShare to FacebookShare to Pinterest
Labels: Tweets

A short review:
Martin takes racing to a new level in this science fiction book about racing, freedom, and corruption.  Readers will relate to Phee, the main character in the book, whose tough as nails and doesn't let anything stop her.  Although the main character is female, she packs a punch, which makes this appealing to all readers.  The secondary characters round out the book by strategically placing not only teens, but adults in the narrative that aren't just stock characters.  Even better is Martin's ingenious use of slang from the future, revolving around the culture on the planet.
Vividly descriptive, this book will take any reader to the end.  Like Hunger Games and other dystopia books, it shows not only how far humanity has traveled off the path of democracy, but also how the main characters are willing to sacrifice to make a change.
Highly recommended JH/HS 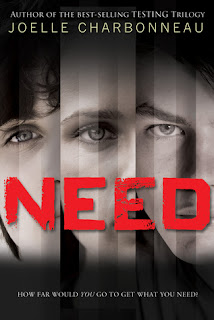 In the small town of Nottowa, people aren't aware of what's truly happening....

Kaylee Denham needs something. Her brother is slowly dying and there doesn't seem to by anyone that can help him, nit even her best friend Nate, who needs to pass a final after winter break.

Amanda sees their friendship and doesn't understand why Nate would even bother with Kaylee. Another one of Amanda's worries is trying to get those concert tickets. Everyone would be so jealous!

Jack, Nate's brother broke his phone again...and he was the first to get what he needed. There are others....Bryan wants a gun, Syndney needs money and the list goes on and on. And that's when the website Need came into their lives.

CONGRATULATIONS. YOU HAVE BEEN INVITED TO NEED—THE NEWEST, INVITATION-ONLY SOCIAL MEDIA SITE FOR NOTTAWA HIGH SCHOOL STUDENTS. JOIN YOUR FRIENDS IN DISCOVERING HOW MUCH BETTER LIFE CAN BE WHEN YOU ARE PRESENTED WITH AN ANONYMOUS WAY TO EXPRESS YOUR THOUGHTS AND ARE GIVEN THE TOOLS TO GET THE THINGS YOU NEED.

One click of a button and an answer to the question posted on the site: WHAT DO YOU NEED? After Kaylee, Hannah, Nate, Jack and the other click on the button, their request is processed.

Everyone on the Need site knows each other because it's only for their high school. What they don't know is who is behind the site. What they care about is getting their requests fulfilled. What they don't understand is that you never get anything for free. All you have to do is a little harmless errand, something as simple as a note slipped somewhere, cookies delivered to someone's door, a simple receipt put in among the others.

But it's all of those little things that begin to snowball, and now people are dying and lives are in danger. Kaylee is beginning to see the pattern, but it still isn't clear who is behind Need and the errands that are slowly becoming more malicious and complicated. There is a pattern..but is it too late?

Joelle Charbonneau has written a fast-paced novel that will keep readers entranced not only in the story, but in the character development that happens alongside the plot. Written in small chapter and in various character voices and point of view, Charbonneau creates a web of lies and deceit that the reader will become entangled in, wanting to know the final answer. Quick, smooth, and electrifying, once the page is turned, there's no going back for the reader. it takes awhile to fully realize the characters because of so many voices in alternating chapters, but Charbonneau sharpens the reader's insight the more they read. It's definitely a book where you have to become invested in all of the characters, not just one. Highly recommended for HS