So, I picked this galley up at ALA and read it from Texas to Illinois when I went on a family vacation....and I LOVED IT! In fact, I loved it so much, I enlisted the help of my father-in-law to help put together some farm implements he has laying around for most of the background video in this trailer. We left it up in the backyard for a few days...hope anyone who came up to his farm didn't think we were joining a weird club or something. I put my iphone to good use on this one : ) Anyway, hope you enjoy this! 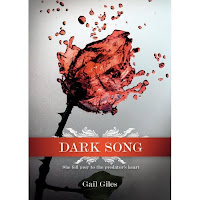 Ames lives a more than comfortable life....large house, private school, expensive vacations and clothes. She has her circle of friends, with Em at the center. Ames is known as the "good girl," one who never challenges the rules and does well in school. But Em has given her a taste of what it feels like to bend rules, and Ames likes that feeling.

And then her world crashes. Her way of life is completely shattered, thanks to her father and she learns the hard and fast way of what life will be like. Her circle of friends have abandoned her, her way of life given away at garage sales, and what little they have left is swept away in a tide of embarrassment to Houston, where she now lives in the projects, mucking away discarded drug needles and animal droppings in her new home. She hates her life, her parents...everyone except her little sister. And that's where she meets Marc.

Marc takes him time when it comes to approaching Ames. His attraction to her began the first time he saw her. He knows the dangers and the unfamiliar territory Ames has moved into and he sees something in her that others don't - he tests her dark song, that feeling of living on the edge, the thrill of breaking rules without attracting attention, and finds hers without ever letting her know his own dark song he plays so well...

Ames feels the dark song too and the music is getting louder and stronger the more she follows Marc into his world. And she likes it...but will what she likes destroy her and her family or rescue her from a world she knows nothing about?

Gail Giles is a master of YA fiction on the edge. She's crafted a book where readers are drawn to Ames's privileged life and the deliberately crafted downhill ride she finds herself in. Picture perfect on the outside, the dysfunctional family side is revealed to the reader in perfect literary accompaniment. Fans of her body of work will not be disappointed!
at 8:35 AM 1 comment:

YOU by Charles Benoit

You see the jocks who walk the halls with their packs, looking like kings and making sure the weak know where they stand. People like Jake….

You see the girl that will be with almost anyone and uses them as much as they use her. People like Kristi….

You see the guys who wear hoodies, black shirts and baggy jeans and really don’t care about anything. People like Derrick, Max and Ryan….

You see the girl that gets along with everyone. The one you think about all the time, talk to as much as possible, just to look at her. People like Ashley….

You see the one the sparkles along the outer edges. He gets along with adults and can bring down the strongest by knowing what makes them tick. People like Zack….

And you see yourself. Wondering how you got where you are now. Looking at the choices you’ve made that altered your course of life and wondering which one was THE one that changed your life. Looking at the anger that bubbles deep inside of you and how you’ve tried to ignore it. And then you really look around you and see all of the blood….You’re name is Kyle Chase and this is your story.

What a POWERFUL book. This is Charles Benoit first venture into YA literature, and he comes in with welcome arms. You is the story of one main character, but the story cannot be told without the characters that surround Kyle. But makes this novel such a strong one is how Benoit writes about the STARK REALITY of high school from the perspective of the main characters. When you read this, you are walking down the halls of high school and understand what Kyle is going through as well as his reasoning for acting the way he does toward his teachers and parents. Reminiscent of Gail Giles’s Shattering Glass and Chris Krovatin’s Venomous, this is a book that goes the distance and doesn’t stop. I read this is one sitting and think teens and adults will too. Highly recommended.

Booktrailer Tech Tip (a little early, a little late too!)

I haven't done a book trailer tech tip in awhile, and I thought I'd share with you an excellent way to begin your book trailer training. After making several for awhile, I realized I was looking at television commercials, beginnings of programs and even movie trailers in a completely different light. Now, it's, "Look at that transition! Look at how they incorporated music into the action!!"
Well, of course my next logical step was to look at some really good trailers in order to see what it took to make them. There are many found on youtube.com that are made by publishers who spend big bucks to create them. It was literally a library of trailers that I sat down and watched and realized what mine lacked. I went back to the drawing board and began using techniques from what I saw and creating some of my own.
So, here is a link of book trailers that I found on youtube. Included is a virtuoso of book trailer making, which you'll see on the big screen on the Youtube Book Trailer tab...she's amazing...
So look, take notes, and watch watch watch!! It'll definitely help with your trailering!

This was shared from another librarian and I couldn't help but pass it along...the things librarians and/or library students come up with! The vintage aerobics one is by far the most disturbing : )

The Replacement by Brenna Yovanoff

Malcolm lives in the quiet town of Gentry, where it's safe and normal...but only on
the outside...
Malcolm has always known that he was different. He can't stand the iron smell of blood, and even touching the metal makes him deathly ill. His father, the local pastor, knowns his son is different, especially because Malcolm cannot step onto sacred ground without his skin burning. He's not of Them...the normal humans in town, and his only goal in life is to stay under the radar, become unseen and invisible.

But his world is shattered when Tate, a girl in his high school looks at him and begs for help. Her sister Natalie has died, but it isn't Natalie - she was switched
with something inhuman, ugly, deformed. And Tate seems to know that Malcolm the
unusual may know something about it.

Not quite human, Malcolm himself was switched at birth with the real human Malcolm. Now, the real one is gone and this revenant who inexplicably lived has to take on a new role, a new skin...and new revelations not only about him, but about his family
as well. And his past comes to reality when he opens the door to the House of Mayhem
that lies under the slag heap and speaks with the Morrigan for the first time.

Now a battle rages between the Houses of Mayhem and Misery, and Malcolm, not quite human but not quite the Others, is caught in the middle and must make a decision to go with what he knows or dispel traditions that has kept his town safe and bountiful. But can he do the opposite of what he's been taught or continue living a
life of lies and deceit, along with everyone else in town?

Yovanoff has written an intriguing tale of faerie and humanity that is sure to grab not only the attention of those genre lovers, but those who haven't read many urban
fantasies. It captures your attention from the great cover to the story that weaved so well throughout the book, intermixing characters' lives and their own stories into one....Only one person of three that call themselves the Merry Sisters of Fate (and includes Maggie Stiefvater, author of Shiver and Linger), YA readers will pick up and devour this one.
at 12:04 AM No comments:

The amazing things you learn in workshops!!

SO, this summer I had the opportunity of providing some professional development for librarians and teachers around this grand old state, and had a great time doing it! Not only did they learn some things from me, but I also learned from them as well!! And then there were those moments I just stumbled into....and here's one that I had to share!!
If you use Prezi, did you know that you can embed youtube book trailers into the presentation? This is the place where publishers are putting their trailers, and they are very professionally done...
Well, if you embed them into Prezi and then use it offline, the video is still maintained even if you're not online - LOVE IT!!
And there are some great prezis to search through too! Someone in a workshop found this Prezi, and I LOVED the layout...had to share it as well!! Thanks Cassandra, for making this a public prezi!!

go to: www.schooltube.com to embed it into your next booktalk!
at 10:29 AM 3 comments: