The Savage by David Almond; illustrated by Dave McKean 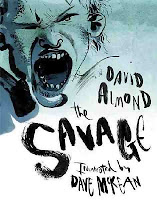 What happens when something so traumatic happens in your life that it begins to blur between reality and fantasy? Are you still a mild-mannered Blue or a savage? That is the premise of David Almond’s new book, and interestingly enough, he takes on this book while doing some unique blending of his own.

Blue has lived a pretty happy and decent life with his parents and little sister. The only exception is Hopper, who takes every advantage he can to belittle, spit on and cause Blue pain. The only person who helps Blue through this situation is his dad….but one day, unexpectedly, his father has a heart attack and there is only a huge hole in Blue’s life.

His teachers and his mother know that Blue will have to find a way to cope with this sudden and tragic loss, and the avenue he turns to is writing. He begins to create a character, a savage boy, that helps him deal with his loss, his anger, and his hatred and love for people through this alternate persona. And with the continuation of the savage boy’s story, Blue’s inner life of struggle begins to unfold.

David Almond, along with illustrator Dave McKean has created a book that looks into how a traumatic experience evolves from the pages of a young man’s journal into real life. They have taken this book to a new type of print – a fusion of a novel with that of a graphic novel, where chapters are entwined. This, in turn, also solidifies the story of Blue, between reality and fantasy. As Blue’s savage boy persona becomes more real, Blue’s real life becomes to evolve. Symbolism is one of the driving forces in this book and one that older readers will catch onto. Although a short book, it may make some readers go back to the graphic pages to understand just exactly how Blue copes with
trauma, both past and present.

Watch for this type of format in books….Almond’s is only the beginning. Perfect match with Venomous by Christopher Krovatin, another book that blends graphic and traditional prose with anger issues of young adults.
at 11:45 AM 3 comments:

Playing with Matches by Brian Katcher

A neutron walks into a bar and orders a beer….the bartender gives it to him and says, "For you, no charge..."
And so begins the life of Leon Sanders, junior at Zummer High School, whose architecture reminds him of an enormous bomb shelter or an insane asylum.

Leon’s always grown up as a nerd. He’s surrounded himself with sci-fi movies and figurines, and is probably the only one who checks books out of the library at high school. But his status has changed some. From uber nerd in junior high to being unknown in high school, Leon thinks of it as a step up. His group of friends consists of Samantha (a feminist); Rob (who always looks mad) and Johnny and Jimmy (two brothers who “get nostalgic over their greatest farts.) And then there’s the crush…
Amy is the toned cheerleader goddess Leon has always fantasized about ever since he was in the fourth grade. He watches her daily, but she never sees him and the only thing he can hope for is that she will one day look his way and see him. But until then….

School drones one with projects. In his history class, partners are picked and who does Leon end up with? None other than Melody Hannon, the girl whose status is even beneath the nerds. And why? Because of her severely scarred face, caused by a fire when she was four years old. Leon can’t believe his ill fortune but deals with the fact that once again, bad luck follows him.
But what once was just a school project turns into something else entirely, and one that Leon or Melody didn’t even expect. Their academic partnering turns to friendship, which slowly becomes romance – a first for both of them. The only thing Leon can’t get over is her face, but the more he is around her, the more he realizes what beauty is.

But never underestimate the powers of Leon Sanders, especially when it comes to the goddess called Amy. She takes a sudden interest in Leon and when this happens, the only thing he can compare it to is winning the lottery. So he dumps Melody and although he cares for her, she doesn’t matter as much as the lottery ticket with the grand prize - Amy. And things get truly bad for Leon Sanders….

What an AMAZING book!! Brian Katcher’s first YA novel truly packs a punch. The reader can’t help but laugh at Leon’s character and the way he sees the world, but also realizes that he is seriously playing with fire, and emotional fires can burn the hottest. The characters are solid creating the social cliques found in all high schools and the plot is believable and realistic. But it’s the theme that’s the gut-puncher…the motor that will drive this book into YA hands to be talked about and passed around. The ending was thought-provoking, leaving it into the hands of the reader to think about. Kudos to Katcher’s first novel!!
at 12:08 PM No comments:

Final one! Thanks, all!

The Latent Powers of Dylan Fontaine by April Lurie

Dylan Fontaine is….well, it’s easier to explain him. He’s a neat freak, he’s become the caretaker of his family and their cat ever since his mom ditched him, his brother, and his ob-gyn father for Phillippe the artist, to live in the Village in NYC. And that’s just the beginning of his story.

Another part of Dylan is that he’s a nice guy. So why is he in jail? Because he was caught shop-lifting, and the worst part is that he’s spending time locked up for stealing UNDERWEAR….all the time trying to explain to Officer Greenwood about the travails and dangers of trans fat in foods.

But Dylan has a romantic side as well. The love of his life, Angie, has asked him to star in her latest film creation, starring him. He’s excited about the whole deal, including rumors that she’s broken up with Jonathan. He can’t wait to get started, until…Jonathan shows up to help on the project as well!!

Dylan’s only source of love and frustration comes mostly from his relationship with his brother Randy. He loves the guy, but can’t see why Randy is throwing away so much talent and intelligence on guys in the band who won’t take showers and are always stoned. Dylan just doesn’t understand and his frustration is growing…

So what does he do? How can he cope? He finds his avenues and begins to use them to change his life, his way of thinking, his romantic interests, and his obsessive/compulsive neatness behaviors. Some things can be changed, the key is time.

The characters in this book, from the adults to the teens, make April Lurie’s book not only laugh-out-loud funny at times, but also allows the reader to delve into the bitterness of parents divorcing to seeing someone you love not care anymore. It’s written both with comedy and real-life situations in mind in perfect contrast to each other. This is definitely a must-read and a book worthy for all guy readers everywhere. Perfectly matched with Daniel Ehrenhaft’s Drawing a Blank: Or How I Tried to Solve a Mystery, End a Feud, and Land the Girl of My Dreams.
at 10:32 AM No comments:

Thanks for the help! You chose...

Number two of the two videos! I posted as many comments as possible, but still received numerous emails on it as well. There were many that enjoyed Number one, but Number two was overwhelming! I'm going to take these off the web for awhile, to make sure they're correct. Thanks for Alex Flinn for emailing and telling me about a few things I need to fix! And thanks to you guys out there for helping out. Many said the two pieces were very similar, and I agree, but there were some differences....amazing, the help out there! : )
Now, it's off to buy several digital photoframes and upload them with bookcovers from this semester's booktalks as well as the one I'm going to present in the spring!
at 6:09 AM No comments:

“Lia Kahn is dead”
“I am Lia Kahn.
Therefore – because this is a logic problem even a dim-witted child could solve – I am dead.
Except here’s the thing: I’m not.”

Lia has it all…beauty, a boyfriend, the most popular friends, a wealthy family, and a ViM (virtual machine) full of networked friends and a lifetime of vids. But in a blink of an eye, all is lost when an accident nearly kills her. Lia’s last memory as a human is the smell of burning flesh…
When she wakes up in a hospital, Lia is relieved to find out she survived that freak accident, but her nightmare only starts to begin when she realizes the truth. She is no longer human, but a mech-head, a skinner….her brain sliced and diced to program a computer instead. Not breath, no heartbeat, no hunger, no emotions – the only thing left of her is the essence of who she was. Even her body and face have been completely altered. And she’ll remain like this forever, uploading her memories every night before shutting down and hoping that her life can return to normal.

But can it? What exactly is Lia Kahn now? Does she still have human rights, or are those rights reserved? Her friends, her boyfriend…even her family don’t know how to treat her. Lia is caught between being a futuristic monster with the memories of a once real person and trying her hardest to be the only person she knows how to be. Even the Faithers are after her, believing that she is not a creature created by God, but an indecent machine created by man.

And during this time, she meets two very special people who will forever change her. One is human….the other a mech-head…and the decision she will ultimately make for herself and them will alter her “life” in so many ways….

Intense, thought-provoking and realistically written, this book takes the reader into the future and how changes of the power of technology in our daily lives alter us. Wasserman’s book will transport the reader to the future of America, where everything from the presidency to school life is dramatically different as we travel in Lia’s shoes. One can’t help comparing this to Pearson’s Adoration of Jenna Fox, but this is far more intense, with helplessness the only alternative in this disturbing tale of “utopia”. A must-read for any young adult who’s never read science fiction to those that devour it.
at 5:54 AM No comments: