The Future of Us by Jay Asher and Carolyn Mackler 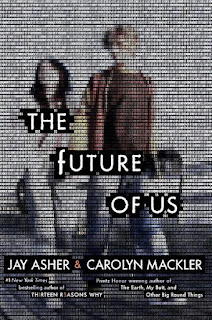 If you had a chance to see your life in the future, would you want to?
It's 1996, and Emma and Josh are your ordinary teenagers.  They've lived by each other for years and have practically grown up together.  But now they're sophomores in high school and things are a little different.  Well, they're WAY different after Josh tried to kissed Emma six months ago - now they hardly speak to each other.  It's what Emma's father sent her that will make a huge impact in their lives...
In Emma's room is a bright shiny computer.  It probably weighs 25 pounds, but it's all hers.  She's heard about people getting emails and sending instant messages, so she's excited about this new prospect of trying it out.  Of course, there's always the problem with sharing the phone line, but she and her mother will work it out.  Josh is the one who hands her the AOL Online CD with 100 free internet hours, but when Emma finally gets online, she's shocked by what she sees.
A page begins to emerge...something called Facebook, which Emma has no idea what it is.  And there on the front page is a woman about 30 years old, who looks kind of like her.  She went to the same high school as Emma, has the same birthday...this isn't coincidence.  What Emma is looking at is her life fifteen years in the future, and she's not quite sure she likes what she sees.  But who can she tell?  The only person who comes to mind is Josh.
He also gets a look at who he is and becomes in the future, but unlike Emma, he definitely likes what he sees and who he gets married to.  His life is amazing!  And what the two quickly realize is that they can send ripples through time from now to Facebook in the future and make changes to their lives and what they see posted on their timeline, in their photos and their comments.  But are those changes dangerous?  What are the repercussions of the decisions they make, create or change not only to them, but to those around them, including their best friends?
This book is chock full of references from the mid-nineties, but not so much as to bog down the reader that it's "old school."  Emma and Josh's relationship not only with each other but with those in their school, stands out the most and creates their unique personalities the reader can't help but want to know more of.  Teens today were born around this year, so they may not get the 90's references (Wayne's World, Boyz 2 Men, only one character has a cell phone) but the theme and situation remains a popular one.  Asher and Mackler switch voices with the characters they write about, which makes this a book you want to read through to see what happens to the other person....right....NOW!  Recommended. 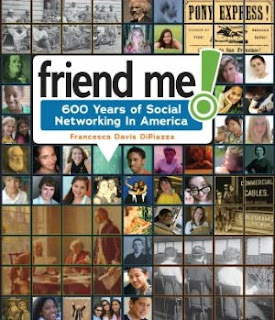 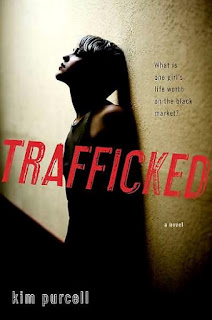 Elena, or Hannah.  It doesn’t matter even if she is the same person.  All she knows is that she is no longer in Moldova but in America, about to live the American dream.
She saw the poster when she left her hometown…a girl struggling in the fist of a giant hand, the words “You are not a product” written underneath.  Her friend Katya warned her about it, but her babulya told her she should go and be free, and Hannah agrees with her.  After her parents were killed in a bombing of a small café, she feels more of a nuisance to her family that took her in.  Hannah knows things are tight, and finding a job as a nanny in America can only help.  That was what she was recruited for from the beginning.
Hannah’s excitement of leaving Moldova for America comes to a halt before she even leaves the country.  Fake passports, handlers taking her to and from places…she doesn’t even want to think about the one in the black car and what he did to her.  Now, as Hannah steps off the plane in Los Angeles, she’s more nervous than happy, and can only hope she can pass immigration without detection.
When she does, Sergey is waiting for her, ready to take her to her new home.  But is home the right term to use for what she has to endure?  Her treatment, her lack of wages, her work hours….the Platonovs promise one thing, but do the opposite.  Hannah is trapped.  She has no friends, no one to talk to, no one who cares about her.  There is only one person she has barely spoken to and it’s a teenage boy who lives beside them.  Hannah is told she can speak to no one or the police will find out and lock her away.  Hannah feels her only protection is the prison she’s trapped in.
The Platanovs requested her specifically for a reason.  Why would they do that and treat her the way they do?  What is the reason behind Sergey wanting Hannah?  When the truth slowly begins to leak out, Hannah realizes the connections are only too real and it’s only a matter of time before the truth could destroy  her life and the lives of those back at home.  Will she ever see home again?
Kim Purcell writes a realistic fiction book that will take readers into the dark and mortifying process of human trafficking.  Her character of Hannah takes the readers through the perspective of the victim and how they become entrapped in a country that celebrates freedom and individual rights.  Most people don’t think America could be home to such a travesty as human trafficking, but it could be happening in your own neighborhood.  This book is as much about the story as it is about bringing to the forefront this epidemic of baselessness.  Purcell derives the theme and plot of this book through personal experience and her author’s notes are a must read.   Highly recommended. 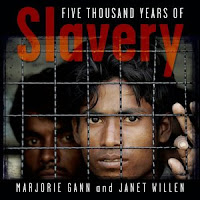 My first blog interview! Doing a happy dance (in my chair)

Texas Sweethearts and Scoundrels are a group of amazing people who live in Austin and love books, libraries, students, authors....you name it!  Every month they post a blog interview, and I (with the recommendation of amazing blogger Pamela Thompson!) am this month's sweetheart....or scoundrel?  Anyway, I thought I'd share this link to my interview :) 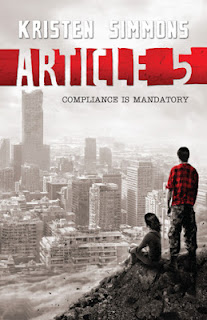 Ember lives in a new United States.  The War ended three years ago, and the government changed.  The strongest arm of the government is the Military Militia.  Their role?  Enforce compliance of the Moral Statutes.  Rumors of mass executions, people disappearing for no reason, prison, deportation….they’re everywhere.  Ember thought they were all rumors until it happened to her.

There are only five articles in the Moral Statutes that citizens need to abide by, but the laws change with the wind.  Ember and her mother live a decent life.  Their only act of defiance is hiding magazines and books from the old days; days Ember vaguely recalls.  She has friends, but the person she misses the most is Chase.  They grew up together since childhood but their friendship turned deeper.  There was no denying Chase and Ember, as teenagers, were meant to be together.  Now, Chase is gone, and Ember misses him.  She remembers those tender moments and always hopes the best for him, wondering if he still feels the same toward her that she does toward him, wherever he may be.

But a knock on her door changes Embers entire life.  The MM (Military Militia) has come to take away Ember’s mother for breaching Article 5, which meant full prosecution by the government.  What was the crime?  Ember doesn’t have a father and Article 5 stipulates that she is to be “rehabilitated.”  What is worse, is that Chase, the love of her life, is arresting her mother.  Nothing Ember does changes Chase – not the past, not their moments together, not their friendship.  He is part of the military machine, devoid of all emotions.

With her mother gone, Ember finds herself in rehab, the worst possible place to be.  Torture, brain-washing, and hard manual labor are a common part of her day.  Escape?  Punishable by death.  But it won’t stop Ember.  She must get back with her mother.  But can she?  And who will be there to help?
Dystopia fans rejoice!  Here is another book to devour through when you’ve read all the other ones.  Simmons’ book paints the future into a very realistic and bleak novel.  Although the main characters stand out, it’s the role of government Simmons creates as a monster character, along with the men in the Militia and how they’ve evolved.  The evolution of Chase’s and Ember’s relationship takes center stage, but it’s also the minor characters and what has happened to them because of the breakdown of our future country and government that conveys the essence of this novel.   Recommended.

Common core pair:  primary sources of the Constitution and Preamble
at 10:17 AM 3 comments:

I guess it's been about a year and a half (maybe more) since I created the livebinders for book trailer resources.  But one thing I have found out, especially with students, is that they tend to open up the link directly within the livebinder, which gives them an incorrect URL when crediting images.  So, they have to open livebinders, open another tab, copy and paste, then go back and forth...BORING!

And so I created a Symbaloo that has most of the link I created with livebinders, but it set up so much more elegantly because of its simplicity.  So, if you'd like to share this with others, please do.  Also know that this is not only for book trailers in the library world, but also online projects for ANY class a student may take that asks them for virtual projects.  The perma link is:
http://www.symbaloo.com/mix/booktrailerresources

I usually make trailers for those books I absolutely loved!  This is one of them.... :)
You can view it on Schooltube or Youtube and I've provided a link if you'd like to download it.