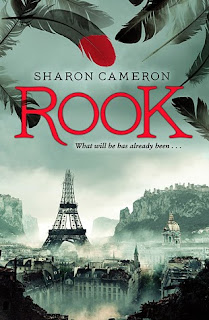 It was known as Paris in the past.  Today, it’s called the Sunken City where two classes live.  Those that live the Upper City have the most splendid views as well as the prestige and money that accompanies their class.  The Lower City is plagued with poverty and filth but is also the stage for the Razor, a contraption that beheads those of criminals or even wealthy family who go against the dictatorship of Allemande, a man small in stature but larger than life.  Beside the Razor is the Tombs, where those awaiting death stay until summoned up by the evil LeBlanc, who is in charge of ensuring Allemande’s rule.

But little do they know Le Corbeau Rouge, also known as The Red Rook, has just entered the city…
Meanwhile, across the sea is the Commonwealth, where those who have enjoy a more pastoral life live.  Sophia Bellamy has just entered the room, awaiting her Banns and the man she is to wed, a certain Monsieur Hasard, who catches the attention of all of the ladies in the room, except her.  But she knows she must in order for her home to stay in the family.  She will not be the ruination of her father and her brother Tom.

But she is hiding a secret most people don’t know.  Lady on the outside, Red Rook on the inside…
Wherever they live, everyone lives in a world of no technology, where they watch as more and more useless satellites fall from the skies.  The world has gone back to the simpler days of non-mechanized work, where most people are back to an agrarian lifestyle.  The world is now a place where plastic sells high on the black market and a can with the strange word "diet" is sought after by collectors of the old world.

There are things that haven't changed though.  Greed, the need for power, tyranny, murder and war are still part of the landscape, and one that the evil LeBlanc intends to see to the end.  The only obstacle is the Red Rook. LeBlanc pulls no stops when it comes to crippling Sophia, but she does have a back-up plan in place, or does she?  Are those working with her for or against her?

Sharon Cameron writes a dystopic novel set in future Paris with all the  regale of the Revolution of its past in an excellent combination.  People in ball gowns from the 1700s are still mystified by modern things of today's world, all set in a future that is as rich and full as the story itself.  What is also unique about this novel is that Cameron parallels her newest novel to the classic, The Scarlet Pimpernel by weaving it into the story in subtle ways.  Sophia is a strong female character who knows to rely on herself first while Rene Hasard, her betrothed, shares the same characteristics with a twist of slyness.  If you have been looking for a great dystopia read, pick up this historical dystopia in all of its glory, romance, triumphs and downfalls. It will not disappoint.

Booktrailer by author: https://www.youtube.com/watch?v=GlSDsV8SuMs
at 11:03 AM No comments: 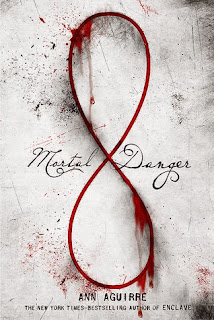 
Edie knew this was the end of the line.  One step off the bridge would take her from the misery of her current life to a world of nothingness.  But someone else has another plan for Edie…

Going to a private school, Edie Kramer knows the difference between her and the Teflon crew – those gorgeous and popular students everyone loves and wants to be like.  But one day would change Edie’s life.  What they did to her was unforgivable and if Edie could teach them a lesson she would.  But really, what kind of lesson could she, Edith Kramer, science nerd extraordinaire, do to Cameron, Allie and rest of the crew?  Riddled with pain and a sense of complete loneliness, Edie has made her decision to jump, until Kian guides her down and gives her an intriguing option.

Edie can’t believe a guy like Kian would even care about her.  He is one of those guys who turns girls, and even women’s heads, because of his unbelievable looks.  Why would he be so interested in her?  When he tells her why he’s there, she can’t believe it’s real.  She gets three favors to use within five years and in return…she will owe three favors.  After going through every possible situation trying to debunk Kian’s offer, Edie realizes he’s offering her the truth and once she agrees, a sign is burned onto her wrist.  She now belongs to the firm of Wedderburn, Mawer & Graf.  And revenge is fresh in her mind…

Going through a complete physical transformation, Edie returns to Blackbriar with a different mindset and agenda.  Beyond beautiful, she starts a new year at high school slowly working her way into the Teflon crew to make them pay.  But terrible things begin to happen to them – coincidence or not?  On top of it all, she begins to see horrible entities…a crazy man who wants to grab her only to disappear; three dark creatures who watch her from the street.  Then Kian tells her the other truth.  Edie is now a pawn between two evil entities, but why?  And what’s the outcome for them both when there isn't a good side to help?

Ann Aguirre delivers a dark novel of love, revenge and survival in her latest.  She fills the pages with fantastically evil creatures the reader must guess at if they’re human, chimeras, or real monsters; what a shift in paradigm or reality.  The strength of the main character, Edie, derives from the fact that although her façade changes, who she is doesn't, which puts her and the plot into a juxtaposition.  Part reality, part fantasy, this book is full-on amazing and will read fast.  Recommended for high school.
at 12:37 PM 1 comment:

I recently sent out a survey about genrefication, and here are the results from over 600 respondents. The link for this is at: https://magic.piktochart.com/output/5927045-genre-survey-spring-2015
at 8:58 AM 6 comments:

The Importance of Libraries and What We Do

I've seen all types of Top Five's for different areas of education, but rarely do I see a Top Five for school libraries (or libraries in general!)  So I combed through then scoured Youtube looking for what I think are the top five videos about and for libraries and this is what I found.  My criteria were:
1. Had to be about school libraries
2. Definitely no cheesiness!  It has to have importance attached to it
3. Well done format.

So, here are the Top Four.  I searched as much as I possibly could for a fifth and couldn't find one, so if you do, please add a comment with the link! :)

Principals Know: School Librarians are the Heart of the School

What Are Databases and Why You Need Them