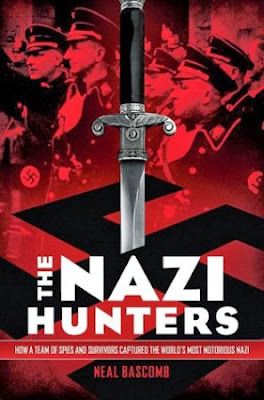 World War II will always be remembered as the war that carved death and destruction throughout Europe. The Jewish people were the main target of this "Final Solution" and weren't safe in any country Germany overcame. Ghettos were created as temporary sites, then came the concentration camps...Auschwitz, Birkenau, Treblinka and more. Over 5 million Jews were sent to these death camps and died there. The survivors left and began a new Israeli nation, but they never forgot the horror they experienced.

The men that played pivotal parts in the "Final Solution" were a group of high-ranked Nazis, given the task to eradicate the Jews. They were the faces of darkness and evil, burned into the memories of the Jewish people who went through the process of genocide. Adolf Eichmann was one of those faces burned into survivors' memories. As head of operations for the "Final Solution, he showed no emotion as he lied to Jews and sent them to be killed without a second thought. At the end of the war, Eichmann went into hiding and was never seen again...until thirteen years later...

While some people actively sought out where he was, there were others who happened to stumble upon the information, and once Eichmann was identified, Israel began an incredibly detailed plot to find, capture and bring him to justice on Israeli soil. This is their story.

But Bascomb also writes a multi-layered non-fiction book that shows different viewpoints of Jewish survivors, leaders of nations, Nazi war criminals and their families, and innocent people who played a pivotal role in Eichmann's capture. It's also a book about spies and one of the best kept secrets of the time. From Germany to Israel, the United States to Argentina, Bascomb takes the reader on an epic journey to find justice to many who still bore the tattoos of survival. While teens today look at World War II as history from a long time ago, the day Eichmann was sentenced for his war crimes was only a mere fifteen years since the ending of the war and the horrors and scars the Nazi party left behind.

Taking cues from traditional history of World War II, Bascomb builds on it with the most sensational news and retribution the Jewish nation of Israel went through in the early stages of building a nation. The spies who undertook this effort not only underwent physical stress and turmoil, but it also took an emotional toll on them by forcing them into Eichmann's life and  looking into the eyes of the man who killed their families and friends.

This is one of those non-fiction books that will reach out to YA readers and keep them riveted until the last page. And when they're doing reading, this story will take them online to find out more. That's the first thing I did after reading the citations (which are interesting in and of itself). It's hard to wrap my mind around this hatred and cold-heartedness of the Nazis, and there were moments in the book that chilled me, but that's what a good book will do. HIGHLY recommended!
at 9:39 AM

Hi Naomi -- I just saw you at the Tri Conference in Sioux Falls SD this past week and you were great! Thank you for all the wonderful information! I saw you just posted this book and I loved it! I am on the YARP (young adult reading program) committee here at my public library and just recommended that book for the teens to read. Thanks again for the wonderful information and am looking forward to passing the information on to my fellow co workers!!

I had SO MUCH fun there, and was very impressed with the YA booktalk by three awesome ladies from Sioux Falls high schools!!
Loved their handouts and am going to adopt this style as well. Simply genius!

I am also a huge fan of this book. It's a great story, well-paced and well-documented, but I am also impressed with how it was edited for younger readers from his adult version. Bascomb tells the reader how the various spy hunters had a personal stake in Eichmann's capture, but he doesn't go into gory details. So when he says someone lost their whole family at Auschwitz, this would mean much more to the mature reader who can bring some background to the reading, but it would not give a middle schooler nightmares.

Also Bascomb carefully explains how much it meant spiritually to the new Israeli state to have the architect of their suffering brought to justice in a fairly conducted trial on a world stage. It explains why they couldn't just shoot him in Argentina.

Also, I've been in a discussion group about quest tales, and I think I could make a case that this nonfiction tale follows some of the tropes of a classic quest narrative. The "hero" could be any one of the spy hunters, but Eichmann is clearly the evil they are fighting. They wander to a far country, and among their company are various archetypal characters. Usually on a quest there is some type of healer, and the Israelis did indeed bring along a doctor to see to Eichmann's health and to keep him sedated. The team gets a little lost for a while, and they almost don't pull it off, but ultimately they do, and the world is saved from evil yet again.
Yes, I loved this book!