The Infects by Sean Boudoin 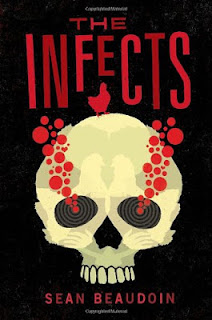 Nick's life isn't all that sweet. His mother is gone, his father, whom Nick refers to as the Dude, has decided to retire into a life of continuous tanning (really...he's that retired), and his sister, who has a condition, hides under furniture playing video games. Income? None, except for Nick's paycheck.

Nick makes ends meet working at probably one of the worst jobs in the world...a chicken factory.  His job is to take the processed chicken and make sure they're cut up.  And they go through a LOT of chicken.  Fresh Bukket is THE chicken place everyone goes to for tasty treats like Chixx Nuggest, Neck Hunklets, and Larder fries.  On the  bright side, Nick gets a promotion...to a creepy, unused, secret part of the processing factory.  This is when his life changes - literally.

When Nick accidently ruins the expensive machinery (due to a cut and bleeding all over the chicken), he is assigned to Inward Trek boot camp, along with several other miscreants of society.  He is Nick no more, but rather Nero.  Happily, or unhappily enough, there is an Inward Trek for girls as well, and Nero spies the love of his life, Petal, on the bus for girls.  But why?

After they put up tents, morning arises for another day.  And Nero sees the unbelievable:

"Um...Counselor?"
Jack Oh looked up and grinned.  His knife jutted out of the meat of his shoulder
sunk to the handle.  It didn't seem to be bothering him much.
"You need some help?"
Jack Oh didn't answer.  His teeth were red and wet, his eyes yellow and pinned.  He was
stubbornly chewing something, probably a wad of Skoal.
Right?
Nero took a step close.  Didn't want to, but had to.
Had it see.
If it was.
Skoal.
Another step.
Nope.
Wasn't tobacco at all.
Matter of fact, Counselor Jack Oh was eating chunks of Counselor Bruce Leroy.
Okay, that's gross.

If you like guts and gore (or know someone who loves zombie books), then this is a must and if you want to chuckle while cringing, you've come to the right place.  Beaudoin's writing is terrifyingly funny, from the horrors of running from a horde of zombies to the Zombrules that Nero makes up. What makes this book so unique is that it is served with a side of tongue-in-cheek humor.  Beaudoin also tosses in a dash of romance and a liberal pinch of a secret ingredient you'll be surprised about when it comes to fruition at the end of the book.  Unlike other zombie books, Beaudoin creates a real zinger of how the whole zombie revolution begins in his novel.  Gross, raw (no pun intended...okay maybe), fast-paced, funny.  I like this new take on dead people.  Book trailer on Youtube:  http://www.youtube.com/watch?v=YQOBc2RYCL4
Recommended for high school.

OOOhhhhh, creeeepy! Sounds fabulous and gruesome! That sells it! Adding it to my order!