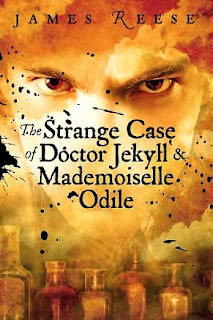 The year is 1876, a bloody and bad time for Paris.  First the Prussians invade, causing mass starvation in the city.  Then the Communards fight back, starting a civil war, killing tens of thousands of people.  But it's the first invasion that created a monster... or two, quite by accident.

Odile and her little brother, Grulechon, had sought the refuge of Paris after their parents were murdered for being Cagot witches.  With little else to survive on, a kind woman took in the two orphans.  The only things Odile had of her mother's was a waistlet containing her mother's precious books, and some vials of herbs and other assorted things Odile has no knowledge of.

Now, years later, Odile is selling rats as food, and running from her latest experiment, which has turned a chimpanzee into a murderous feral animal.  And as she's running away, she runs right into a very young Henry Jekyll, lately of London...

Through as series of coincidences, Odile once again is forced into Dr. Jekyll's path, the latest being an eye infection that is causing her little brother blindness and pain.  Henry offers Odile into his home so he can treat her little brother, Grulechon, and slowly a companionship builds up.  But this companionship quickly turns into the twists and turns of spying and sabotage as Henry sees what happens to Grulechon when Odile takes matters....and witchery....into her own hands.

Dr. Jekyll very much wants those transforming salts, and when he gets them, and Mr. Hyde comes out, the war in Paris goes from outside to inside the mansion Odile is part prisoner to.  But the salts are running out...what is the secret Odile is hiding, and can she keep Mr. Hyde at bay?  How far will Jekyll/Hyde go to get what they want, and how far is Odile willing to go to keep that secret?

What an excellent mixture of historical fact with historical fiction!  Akin to Oppel's This Last Endeavor, a tweak on a classic becomes a brand new YA fiction book that will lure readers to the classic tale. James Reese relies on all of  to create a newly formed Henry Jekyll in his younger years, and the recounting of what happened before the famous Robert Louis Stevenson classic, where Dr. Jekyll is an older man in England.  With a small cast of characters in a rich background of Paris in turmoil, those YA readers of historical fiction and fantasy will enjoy losing themselves in this book.   Inset of a map of Paris is especially helpful.  Recommended.
at 11:25 AM