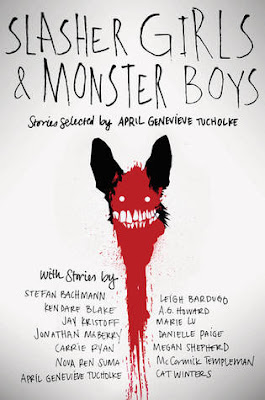 Let me begin by saying if you LOVE horror fiction, you MUST pick up this amazing story collection!  Written by some well-known YA authors (think Carrie Ryan and Jonathan Maberry to name a few), the stories compiled with make you cringe while you keep reading story after story to see what terror the next tale holds.

April Genevieve Tucholke put together an amazing compilation with the idea of writing a new story from classic ones not only from books, but also from movies and television as well.  Each author, at the end of their dark tale, lets the readers know what inspired them to create their short story.

But it's the short stories which are downright horror(ibly) amazing.  There are fourteen short stories altogether, but here's a quick rundown of my favorites:

The Birds of Azalea Street by Nova Ren Suma: Three girls, all friends, think they know about the creepy guy who lives next door. Leonard may have the neighborhood fooled with his kindness and baked goods, but the girls get creeped out every time he looks at them.  And one night, Leonard brings a beautiful girl home and Tasha, Katie-Marie and Paisley see him sneak her in but they never see her again, except a few times through windows.  Something's not right, and they're about to find out how not right the situation becomes...

In the Forest Dark and Deep by Carrie Ryan: Cassidy has seen him in the forest since she was seven years old.  It all began when she discovered a most beautiful spot in the woods with a table in the clearing.  Perfect for tea parties!  But she felt someone watching her and out stepped the March Hare, the size of a man, dressed like a man, but not a man at all.  She knew he was watching her, but was it for good or evil?  Now at seventeen, she goes back to the woods but it's not longer tea she brings with her.  Cassidy thought the horrible tea party she became a part of was in the past, but then she sees the shadow of the March Hare again...

Sleepless by Jay Kristoff: Justin is in love, even though he's never met her.  He doesn't even know her real name, just her online one: 2muchcoff33_girl.  Neither of them sleep very well and their online conversations go from cameraderie to flirting to beginning to actually want to meet each other.  Of course, there are barriers Justin will have to overcome, like his overprotective mother, who constantly reminds him of how evil girls are.  But it doesn't matter.  He knows she was fated for him.  He's taken his time wooing his last three girl friends, even if the relationships didn't work out, and he's willing to try again  with 2muchcoff33_girl because he knows she's different and they'll work things out....

Stitches by A.G. Howard: Sage, Clover and Oakley lost their Ma, the gentle one.  Now all they're left with is Pa, who drinks to much, disappears too long, and hits too hard.  They live in the middle of nowhere with very little but themselves until they meet The Collector and he changes their world.  Pa got in trouble in town and The Collector came to help.  He wants to make Pa a better person, and for each visit he makes to the house, the children begin to see a definite difference in Pa.  He's kinder, gentler, not prone to drink.  But when Clover finally finds out the horrible truth about why, she's intent on revenge and goes to seek The Collector to exact it...


A summary of this story collection is best summed up by April Genevieve Tucholke's dedication,

"For everyone who read Stephen King
when they were way too young."


Recommended upper HS and beyond