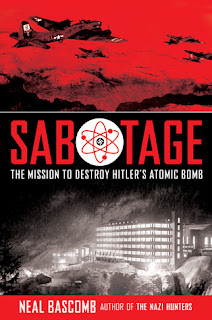 While WW II was waging furiously in Europe, some countries didn't see as much action. But it didn't mean that pivotal moments didn't occur in those countries.  Switzerland declared itself neutral, but Norway didn't.  And there was one place in Norway that became very VERY interesting to the Nazis.  It was a place so obscure and rare, they would do anything to make sure they could control it.

An interesting fact - the science behind the nuclear bomb was being explored before and during World War II.  Everyone knew that whomever developed it first would win the war.  And the race was on.  Different physicists and scientists came up with various ways to create one and there were many elements that had to be used.  One of them was called heavy water.  Hydrogen has been replaced by deuterium, which made it essential for bomb making. The unfortunate thing was that heavy water was difficult to produce and there wasn't much of it.

But there was one place in Europe where heavy water was produced.  The Vemork Hydroelectric Plant in Norway.  Difficult to access, it was the perfect Nazi situation, making it hard to infiltrate.  It was to be a huge Nazi secret that gave them the extra incentive to win the nuclear race.

One thing they didn't count on was the patriotism of the Norwegians.  There were underground resistance groups that sprung up and when the Nazis found them out, they used scare and death tactics to contain them.  It only bolstered them to fight back even more.  Several Norwegians went to England to train with the secret intelligence service to become infiltrators, spies and saboteurs.  They were to go back to Norway and create new resistance groups and sabotage any Nazi effort.

The top priority was to destroy Vemork....but could they without getting caught or putting the small town of Rjukan in jeopardy for their lives? Even worse, their mission was to take place in winter across a vast frozen area where survival would be severely tested.

Young adult non-fiction is fascinating for one very simple reason - these are the events that aren't usually written about in history books. Neal Bascomb hit it out of the park with his newest book. Narrative in nature, Bascomb tells a riveting story as well as providing images and photographs of the main players and sites.  In hindsight, readers will see how one mistake could have changed the outcome of the war. This is the invisible part of WWII teens will find fascinating.

Black Out by Robison Wells
at 2:23 PM

Glad it's good for the middle school age, my son with like these! He is currently reading Silencing Sharks which is so awesome, it's by John Hope and I highly recommend, great for middle school ages as well! johnhopewriting.com is the author site.

Stories about hitler was a dark history and the human tragedy that makes us aware of the importance of humanity and mutual respect between nations, races and religions.